We have downloaded the required application, created a project in intaQt Studio and configured the Appium Desktop app to find XPaths from the Selendroid Test App.

Create an Appium configuration file by right-clicking on your project's name, which is on the left side of the window. Select New ->File. Name the file Appium.conf and enter the configuration properties:

Create a directory called Features by again right-clicking on the project name -> Directory.

Right-click on the Features directory -> New -> Feature and name the file entertext and the Scenario Enter text and press 2nd button. A Feature File template will appear: 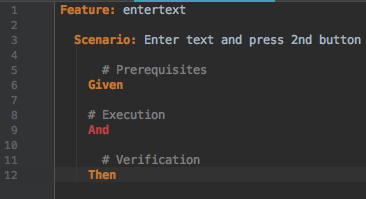 Write a step under the # Prerequisites section that tells intaQt we need a phone:

Open the app on the phone. On a second line, write the following step:

5. Write the Test - Enter Text into the Input Field¶

Write a step that tells intaQt to type text into the app under the # Execution section:

This tells intaQt that we want to interact with phone A. You will notice that the text is red: this is because it isn't recognized by intaQt. In that case, we need to create a Stepdef for it.

6. Write the Test - Create a Stepdef¶

Create another directory called stepdefs by right-clicking on the folder -> New -> UI Steps.

Edit the Stepdef's first line so that it matches the step we used in the Feature File:

The Stepdef takes one parameter called text. This will allow us to specify any text that we want in the Feature File.

Return to the Feature File where you have already used the step. You will notice that though definition for this step exists, it will still be highlighted red. We need one last configuration to solve this.

Create a new empty file in the project root directory called Glue.conf and paste the following in it:

This configuration tells intaQt to look in the stepdefs directory to find our custom Stepdefs.

Return to the Feature File and the step is now white.

7. Write the Test - Create the View¶

Write a View to select the Selendroid Test App's input field under your Stepdef:

This View contains the following:

8. Write the Test - Use the Stepdef to Address the View¶

Add a line that allows our Stepdef to wait for the View to appear:

This only makes the Stepdef wait for the View, but it does not yet interact with it.

Add a line to InputFieldView and expand the View to the following:

This new line defines an Action towards the inputField:

9. Write the Test - Modify the Stepdef¶

Revise your Stepdef to the following:

Assign the View to a variable, v:

Click the X and close everything until you see the Start Server button that appears after launching Appium Desktop.

Return to your Feature File in intaQt Studio after closing the Appium Desktop app.

Click the green Run button located on the top right side of the window:

Right-click on the Feature File and select Run 'entertext.feature' and it should return the following:

The Selendroid Test App will now launch on your phone and "some text" will be entered into the field as the text is being executed.

Update your Feature File so that it adds a button-pressing action as well as a wait statement:

Update the View so that it contains the additional element (the second button in the Selendroid App) and the Action performed on it (a click).

Create a new Stepdef that defines the press the second button step from the Feature File and links it to the View.

If you find an issue or face trouble finding the correct XPath, refer to the Stepdef example below:

This tutorial has introduced you to intaQt's Apptest, where we created a test case that first enters text into the Selendroid Test App and then presses a button.

We demonstrated how to set up a project with a recommended directory structure, illustrated the Appium Desktop app's features that help you locate an application's XPaths. Using the XPaths, we then constructed our test cases in intaQt Studio using the UI Steps language to describe the Views and by writing a Feature File to execute the steps.

If you would like to create an Apptest using a different app, this tutorial's Appendix explains how to download other apps and get their APK onto your computer. Additionally, the intaQt manual's UI Steps Language, UI Steps and Apptest chapter contains further reference material to help construct Views.